Tamil Wedding Rituals that Makes the Wedding Ceremony So unique

Tamil Wedding is said to be one of the most vibrant ceremonies with lots of fun-filled and lighter moments. The cultural and traditional rituals of Tamil wedding emphasize the legacy of the Tamil community.

In fact, there are a lot of people from the Tamil community who reside in the state of Kerala and yes, they are closely associated with our own cultural traditions. However, when it comes to marriage, the Tamil people opt for their own traditional aspects.

It’s quite an interesting thing for us to participate in a Tamil wedding to witness the cultural significance of the community.  Let us have a look at some of the exciting Tamil wedding rituals. 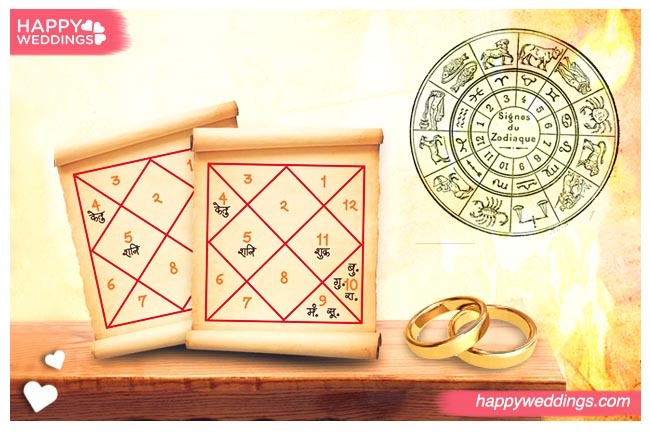 The first and the foremost ritual associated with Tamil Wedding is the matching of the horoscope. Tamil people value it the most as they believe it is mandatory as per Vedic beliefs. The wedding date as well as the Muhurtham (auspicious moment to tie the knot) will be decided during this time. 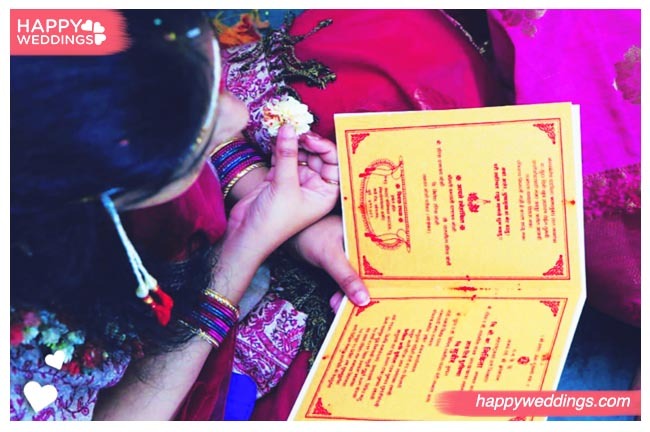 This is the official invitation for the marriage ceremony after the date has been confirmed.  The letter clearly outlines the needed names of the family members of the bride and the groom. It is also signed by the heads of two families. 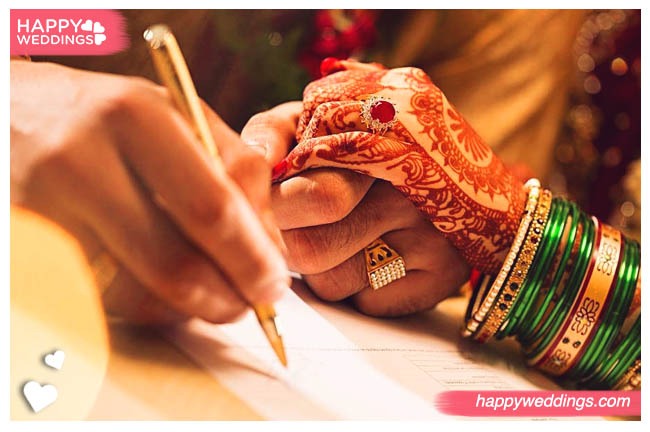 Once the marriage is fixed, the marriage agreement will be exchanged by both the families, mostly as per an astrologer’s guidelines. It happens at the groom’s house. The agreement is exchanged on a platter that will be filled with betel leaves, nuts, bananas and coconut. 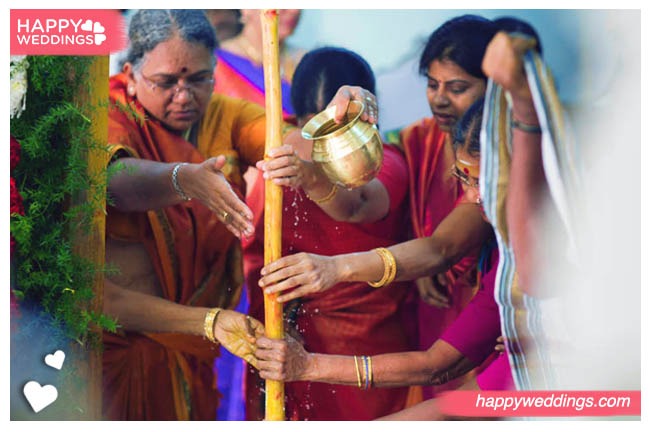 It is an auspicious occasion where special prayer is offered by both the families of the bride and the groom. They either visit a temple or arrange the ‘puja’ at the home itself. This is done for the marriage to happen without any obstacles. The ritual is performed mostly during the wedding eve. 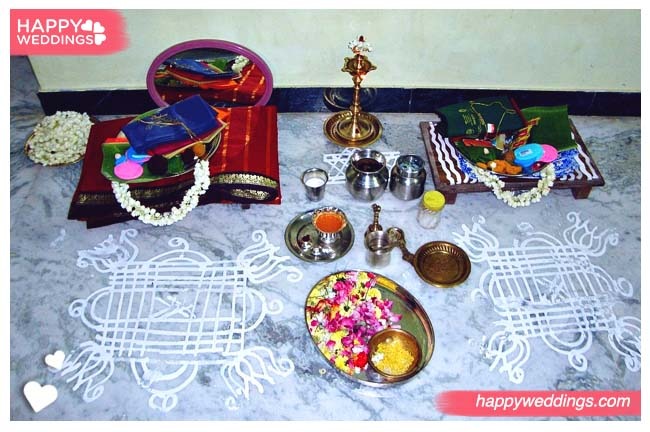 It is very common in India, especially in down south, to seek blessing from elders before any auspicious ceremony.

During the wedding, the bride as well as the groom seek blessings from the elders of their respective families as it is considered as a generous act. 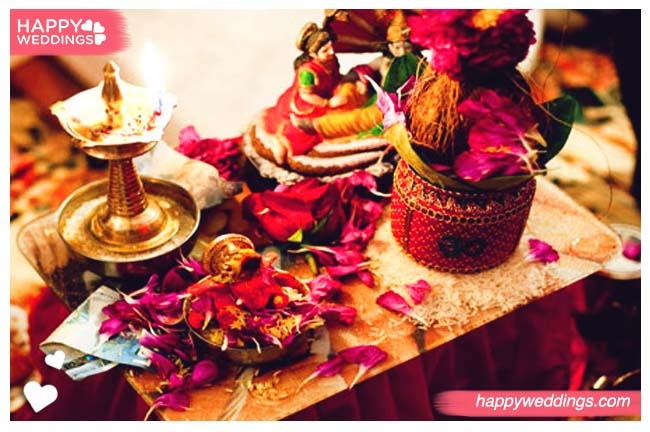 This is an interesting ritual in which married women adorn the earthen pots with vermillion and sandalwood paste.

The pots will be filled with ‘Navadhanyam’ (nine different types of grains) and also with curd. In the meantime, a member of the family draws an intricate pattern of Kolam (traditional Indian sand art) to make sure God’s goodwill. Vrutham happens in groom’s place, mostly the day before the wedding. Since the groom transit to Domestic phase from his bachelorhood, he seeks permission from his father.

A thread, believed to be sacred is tied around the wrist of the groom after it is dipped into turmeric mix. Similarly, a yellow thread is also tied in the bride’s wrist too. It is believed that, by doing so, the bride as well as the groom is protected from the evil. 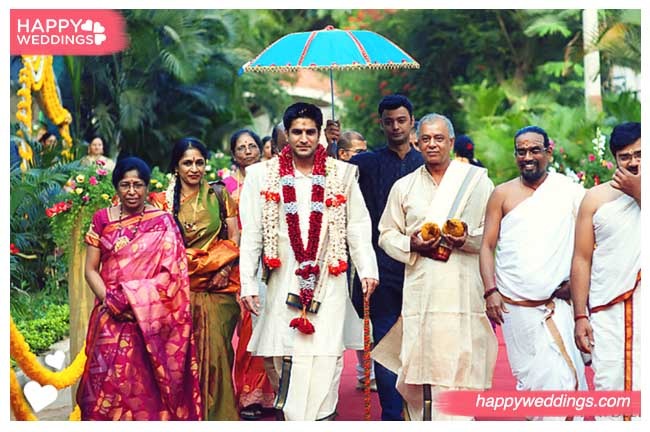 A tray filled with betel leaves, nuts, sweets and fruits are given to the bride’s family. While the hospitality for the groom continues, the bride’s family feeds 10 Brahmins with a vegetarian meal. It is usually done to mollify the ancestors.

Also Read:  Hindu Wedding – Everything You need to know 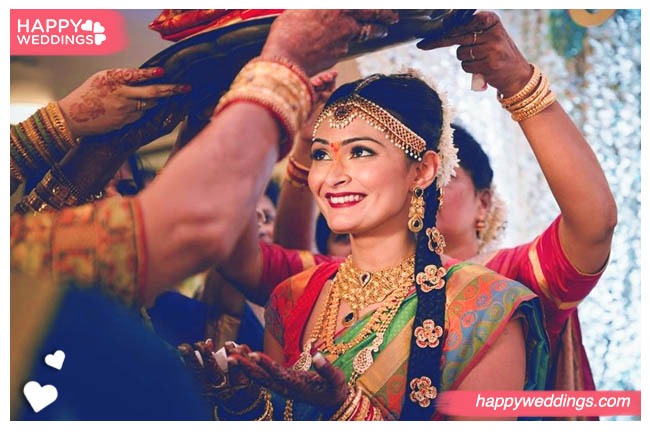 During the ritual, the groom’s family enters either at bride’s house or at the wedding venue.

They gift the bride a beautiful saree along with some jewels. Afterward, both the family offer their prayers to Lord Ganesha and seek blessings.

The married women in the respective families apply sandalwood paste along with vermillion on the bride’s forehead.

The groom is also provided with new attire. In some cases, the bride and the groom exchange ring during this occasion. This ritual is performed distinctly at the bride’s as well as groom’s houses. Turmeric paste, sandalwood and vermillion will be applied on bride’s and the groom’s forehead, face, hands and feet by the ‘Sumangali’s (married women). Once it is finished, the bride/groom will have a bath in holy water and it clearly indicates the purifying of their body and the soul. After the bath, they get ready for the marriage. 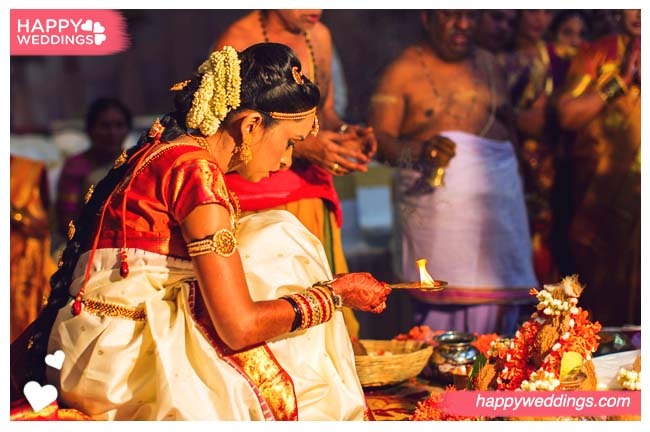 Before the wedding rituals start, the bride performs a special prayer in front of the idol of Goddess Gowri, placed on a platter having rice and vermillion. The bride offers prayers to the Goddess in order to have a happy married life.

One of the very interesting rituals during the Tamil Wedding is the Kashi Yathra in which the groom holds an umbrella along with a walking stick and food items which represents that he is going to sacred destination Kashi.

It is done to symbolize that he relinquishes all the worldly attachments to become an ascetic. There comes the bride’s father who elucidates him the virtue of having a domestic life. He then promises him that he will give his daughter to him. The groom agrees to the proposal and gets back to the venue. During when the groom arrives at the venue, the bride’s parents will wash the feet of the groom with holy water. After that the feet are made dry with the petals of special flowers. 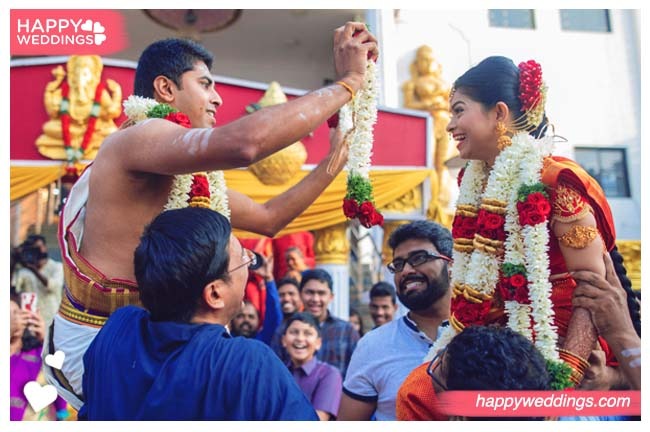 The groom sits at the ‘Mandapam’ and the bride is brought there by her parents. The couple then exchange flower garlands. It is repeated many times just to ensure fun. The bride and the groom try hard to avoid garlanding by the other. Kanyadanam (Giving Away the Bride) 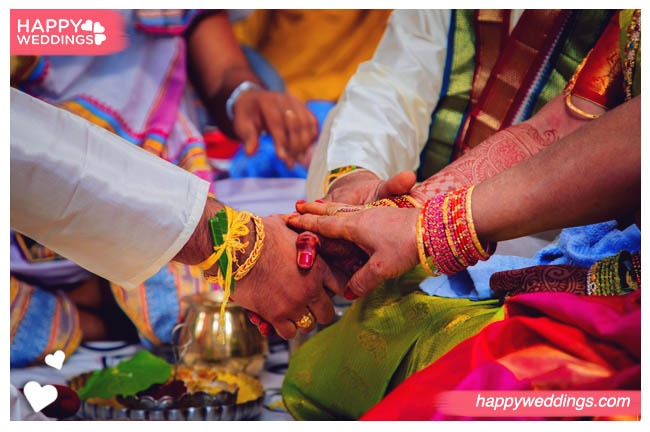 This is the most auspicious ritual during Tamil Wedding. During Muhurtham, the groom’s parents gift the bride a saree with more than nine yards. This indicates the acceptance of the bride to enter groom’s family.

While the others drape the saree on the bride, the groom applies vermillion on her forehead. The ‘Thaali’ (sacred knot) is given to the groom by the priest after blessing and the groom ties the knot around the bride’s neck.

In south, mostly the ‘Thaali’ is tied by the groom’s sister.

Recommended: Register With Us to Find your loved one in no time A reception is arranged for friends and relatives once the marriage ceremony is over. The guests will be served an extended vegetarian feast. They will gift the newly wed valuable gifts The families of the bride and the groom exchange gifts during this occasion. The bride will be preparing to leave and bid adieu to her parents, friends and relatives. During this ritual, the bride and the groom seek the blessings of the elders. Only after that the couple will depart. The groom escorts the bride and reaches the house where the bride is given a warm welcome. After performing the ‘Aarti’, the mother-in-law takes the bride to seek the blessings of the family deity. The couple visit the paternal home of the bride three days after the marriage. The bride’s parents as well as relatives feed them with delicious delicacies and give them precious gifts and clothes. The bride is an iconic figure when it comes to traditional Tamil Wedding. The bridal attire comprises of a Silk Saree with bright shades. And she will be adorned with traditional and trendy gold jewelry. The Tamil groom usually wears a Veshti and Angavasthram, made out of silk. He may also wear a silk shirt also and the Angavasthram will be draped around his neck. Nowadays grooms started using Kurtas and Sherwani as their wedding attire.

Unlike other Hindu Wedding rituals, the Tamil Wedding has its own significance as it is deeply rooted in the culture and the tradition of the Tamil community. Savor the Tamil tradition and rituals next time you attend a Tamil Wedding.