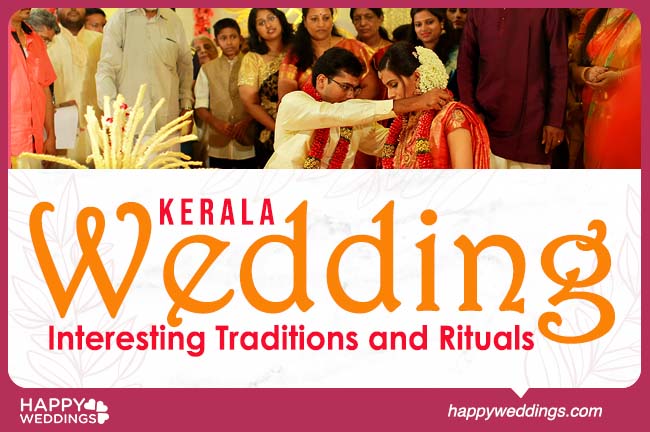 Known for its pristine beaches, spectacular backwaters, picturesque hill stations, lush green flora, and much more, Kerala is truly an amazing destination that shows up the finest, refined and multifarious cultural traditions. Unique in all its aspects, Kerala is well known for its wedding ceremonies that people celebrate with much gaiety and fervor.

Kerala wedding is considered special as it showcases exceptional wedding customs that make the ritual an unforgettable experience.  The very soul of the state is reflected in each and every Kerala wedding where you can savor the cultural essence of God’s Own Country.

When you take a deep look into the Hindu wedding ceremonies, you will come to know that it dates back to centuries, the Vedic period to be precise. Kerala is no different from it and the state has imbibed most of such ritualistic practices from the Vedic period.

The state houses people from various religions, castes, and sects. All of them have vivid cultural beliefs when it comes to wedding ceremonies.

The predominant groups in Kerala are Hindu, Christian, and Muslim communities. The kind of wedding rituals they carry out is quite interesting and a treat to watch.

So, let us have a glance at a few Kerala wedding rituals that helps you understand the underlying religious beliefs each and everyone in Kerala follows.

Kerala wedding ceremonies of Hindus are simple that happens mostly at temples or at community halls. When compared to others, they have only a few rituals associated with the wedding ceremony. There are pre-ritual and post ritual ceremonies for Hindu weddings. Let us take a tour on each.

Before we start, there is one thing that you should need to understand. All these rituals are applicable only for arranged marriages only. Well, we hope you got what we meant. Of course, we are not against love marriage. We are here for the exceptional cases.

It is then when the bell rings. It happens after everything that has been fixed between the two families. Like we said marriages are not only between two individuals but between two families also.

One of the initial steps taken in fixing the date. An astrologer checks if the horoscopes of the bride and groom match and if it matches, he fixes the right muhurtham (the auspicious time) for the marriage. 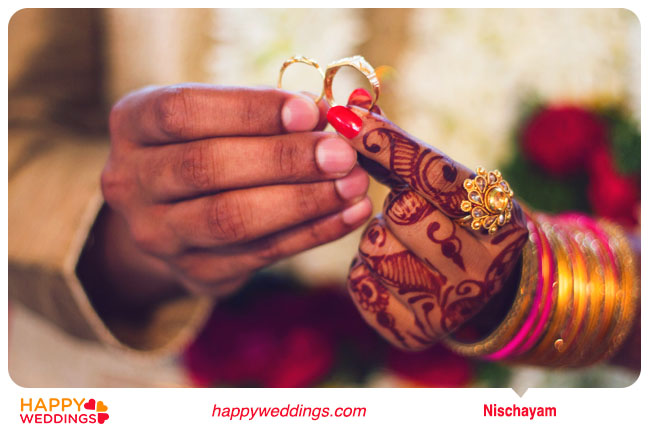 Nischayam means engagement and it is an important part of the Kerala wedding ceremonies.

That’s why the ceremony is also known as Jaathakam maaral (swapping of matched and approved horoscopes).

On behalf of the function, Mothiram mattal (ring exchange ceremony) also takes place. During the occasion, valuable gifts are exchanged including bridal ornaments.

In some cases, people not prefer a ring exchange ceremony, instead, they do it during the marriage ceremony. 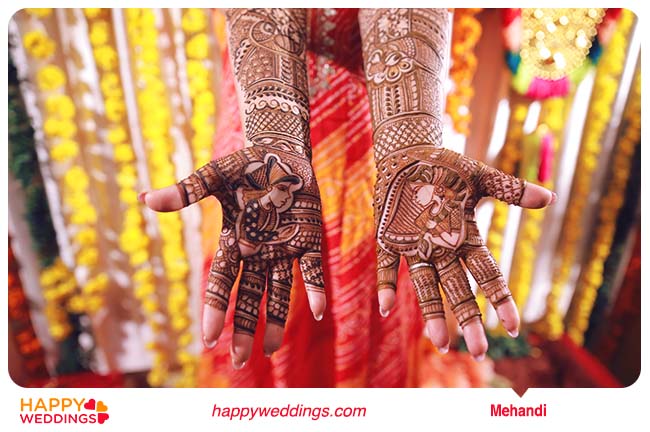 The bridal Mehndi ceremony is celebrated by Hindus in other parts of India.

Though it was an unseen affair in Kerala, people have started doing it here too, but rarely. Mehndi artists will apply intricate patterns on the bride’s hands and feet.

You just tell the artists what design you want. Well, people have started experimenting with novel ideas by designing some crazy and funny mehndi designs.

In Kerala, the Hindu weddings are simple and short. There are exceptions when it comes to Tamil Brahmin weddings, Ezhava weddings, and wedding rituals of other Hindu communities like Viswakarma, Chettiyars, and more. However, mostly the Hindu wedding ceremonies are concise.

1) Reception of the Groom 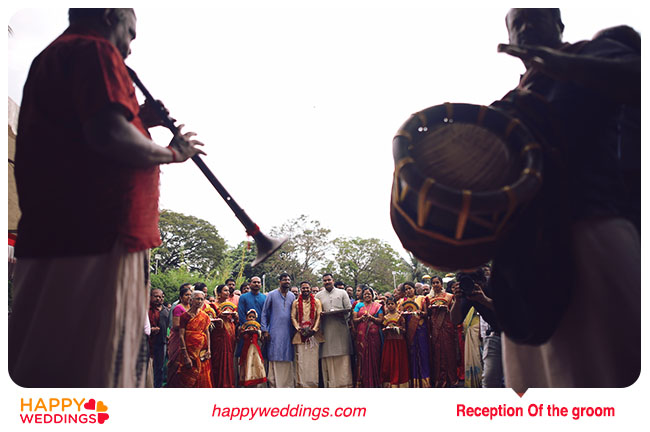 On the wedding day, when the groom enters the wedding venue, he as well his family and friends are warmly welcomed by the bride’s family. Bride’s brother washes the feet of the groom and receives him inside the venue. 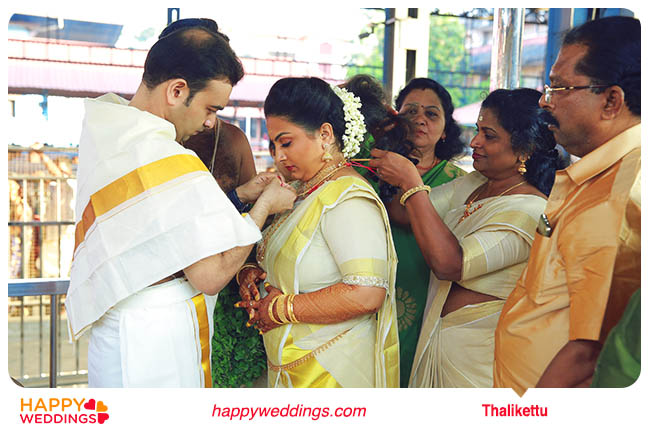 Thali (the wedding string) is of great importance in Kerala Hindu wedding. It signifies marital status, moreover, it represents the enduring love and care that the couple holds.

It is the groom’s father who hands over the Thali. The groom ties the knot around the neck of the bride at the decorated pavilion set inside the venue while people shower them with flowers and blessings.

Once the Thalikettu is over, the couple now exchange garlands. The groom’s father hands over the Manthrakoti (bridal dress) to the groom which he gifts to the bride. On the right hand of the groom, the bride’s father places betel leaves and he then puts the bride’s hand on it. This ritual is known as Panigrahanam. 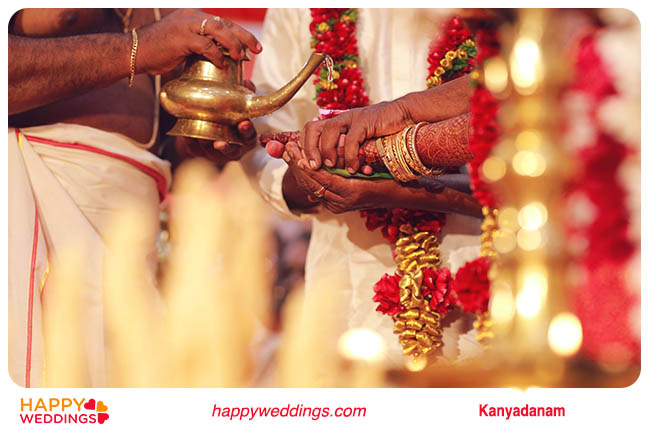 Kanyadanam literally means “giving away the bride”. The bride’s father places his daughter’s hand in the hands of the groom. This symbolically represents that he is handing over the responsibilities of his daughter to him. 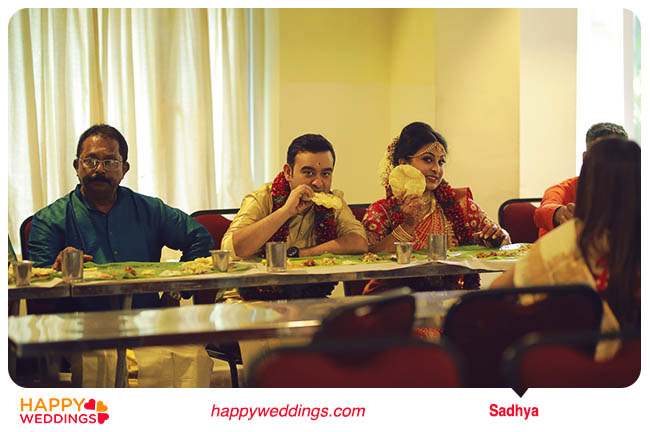 Last but not least. Sadhya, the traditional feast is truly far above all other Kerala wedding rituals, for you to enjoy at its best.

An extended meal served during Kerala wedding ceremonies, the Sadhya consists of 25 dishes served on a plantain leaf. It consists of a variety of rice, pickles, curry, and sweets. 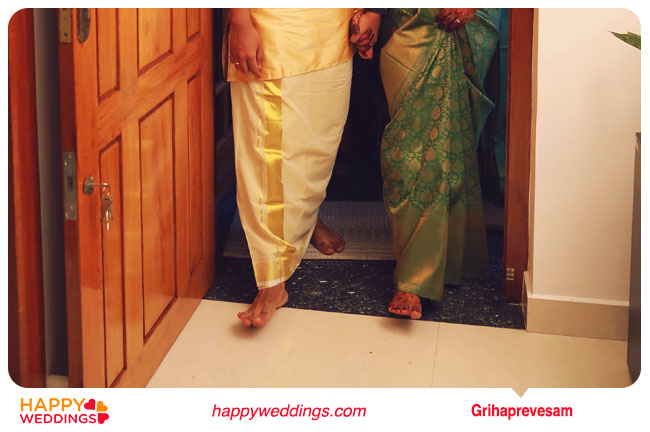 After the wedding, the bride enters her husband’s house and that is what we call Grihapravesh (entering the house). She enters the house holding a traditional lamp in her hand. The ritual is considered to be an auspicious ceremony during the Kerala Hindu wedding.

Even for those who are not very much fond of the traditional attire will have to be dressed in a way in which he looks like a real Mallu guy.

He wears a white mundu (dhoti) with silk or silver border and a silk kurta or shirt. Times have changed and sophistication has knocked our doors too.

Now Mallu boys are also changing their wedding attire to western outfits, thanks that not too many are reluctant to accept that change. The brides drape a traditional saree and wear gold jewelry in the most elegant way.

Today most of the brides make it simple by not wearing too many ornaments. In Kerala Hindu wedding the bride changes sarees two to three times. This includes the most celebrated Kerala kasavu saree too.

It is known for its simplicity. As usual, Christian marriages are fixed by the parents of the bride and the groom. Once the marriage is fixed there are certain pre-wedding, wedding and post-wedding ceremonies. One of the initial stages of a Christian wedding is “Aachaarakalyanam”. It is a traditional ceremony in which the elder people from both bride’s and groom’s families together fix the date of the marriage. Once the wedding date is fixed, the bride, the groom, and their families gather at the church for engagement.

The ceremony is well known in Kerala as “Manasammatham”.

During the occasion, the head priest of the church confirms the wedding by asking them whether they are willing to marry each other.

The bride and groom exchange rings now followed by a grand feast.

The bridal outfits include a traditional touch, while the affair is more homely in nature, held in the tender embrace of friends and family. Christian weddings are much more connected with divinity. To confirm such a divine act, a prayer session is organized during the wedding day. It happens before the bride and the groom enters the church. 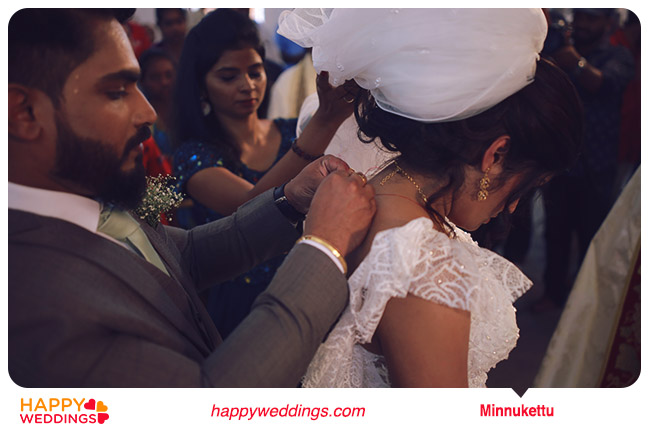 If it is “Thalikettu” for Hindu wedding, tying the knot in Christian marriage is known as “Minnukettu”.

The bride and the groom along with their family and friends stand in front of the altar. And the priest will bless the bridegroom once the “Minnukettu” ceremony is done. Then comes a grand feast with traditional as well as delicious dishes. 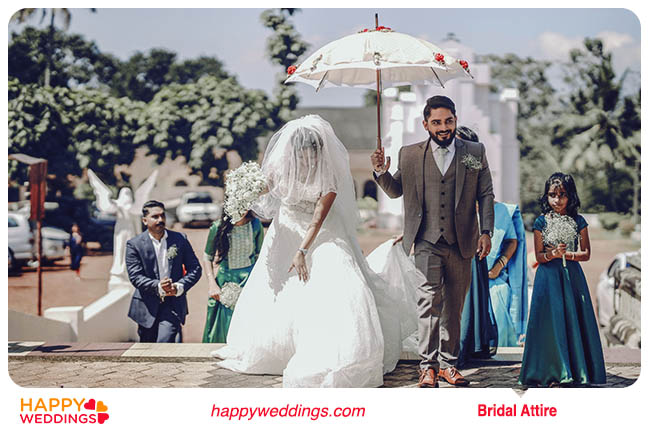 Normally, Christian brides wear a cream saree in different colours or patterns. She will be adorned with trendy and stylish gold ornaments. Trends have changed and now brides have started a long white wedding gown. On the wedding day, the groom wears either a white kurta or a dark formal suit with a white shirt inside the suit.

After the marriage, a grand party session is arranged for family, friends, and others. It is truly the time for them to rejoice and bless the couple.

Have a look at the Intro Video of Happyweddings.com – The Number One Matrimonial Service in Kerala

In Islamic culture, marriage is considered to be a fundamental part of their life. The tradition of marriages in the Muslim community differs from others and however, the ceremony, predominantly known as “Nikah” remains the same. The Muslim marriage ceremonies start with the “Valayidal” ritual in which the groom’s mother gifts the bride with a set of gold bangles. More than just a ceremony, it means lifelong commitment also.  It shows the groom’s mother’s acceptance of the bride to her family, as her son’s bride. After the “Valayidal” ceremony, elders of the family gather at the groom’s house to fix the date of the marriage. It is an inevitable part of Muslim marriages across Kerala where Mehandi experts adorn the bride’s hands and feet.

Also called “Mailanchiyidal” The occasion is celebrated at bride’s house in the presence of family and friends with arts programs such as oppana and Mappilapattu – the traditional song of Muslim community. This part refers to marriage, celebrated either at a mosque or at any community hall. The priest orates prayers from the holy Quran, while both the bride and groom agree to the marriage.

After the Nikah, the bride receives Mehr, a form of dowry for the marriage. It is believed to be a mandatory custom that signifies a promise from the groom to the bride’s father that he would take care of her wife. Another interpretation of this custom is that the groom is rewarding the bride’s parents for taking such good care of his bride. This Muslim wedding ritual is considered a post-wedding ceremony where the bride bids farewell to her family.

However, in Kerala, most of the couples celebrate the wedding night at the residence of the bride as it is believed to be a custom followed over the centuries.

We talked about different post-wedding ceremonies celebrated by different communities in Kerala.

However, the most important and mandatory post wedding ceremony nowadays is nothing but wedding photography.

Once the hustle and bustle of the marriage is over, the couple unanimously chooses the most picturesque location in Kerala for their post-marriage shoot.

Kerala has now become the most popular destination for wedding shoots where the couple along with photographers throng to capture breathtaking clicks for them to relish for a lifetime.

Save the Date – The New Trend “Save the Date” has become a trend as part of today’s Kerala wedding ceremonies. While wedding planning by elders is on its way the bride and groom take a nap from those bustles and get engaged with an uncanny shoot session. This is actually a pre-invitation that officially declares your wedding dates.

In Kerala, monsoon weddings are considered to be special as it is believed that it is a promising time to get married.

People across the globe visit Kerala to celebrate weddings to savor the natural beauty of this heavenly state.

Kannada Wedding Rituals: Decoding the Beauty and Tradition of the Rich Culture

Love Marriage vs Arranged Marriage – Which one is safer?