Kannada Wedding Rituals: Decoding the Beauty and Tradition of the Rich Culture 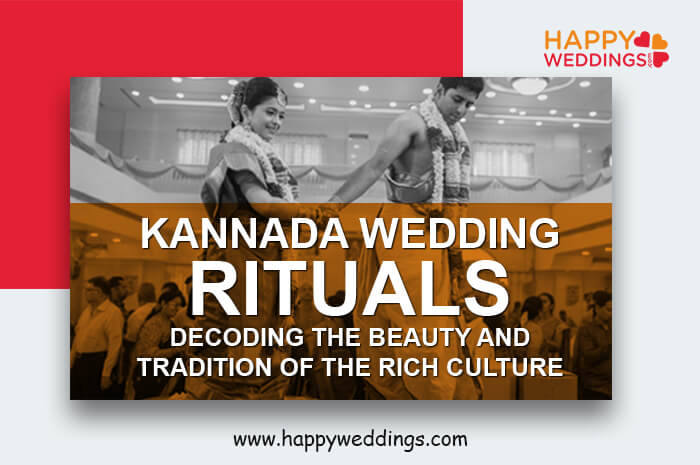 Largely seen in the south Indian states of Karnataka, the Kannada wedding is a typical example of the deep-rooted cultural heritage that the Indians follow as part of wedding ceremonies. Kannada weddings are blissful events, mostly happens during the daytime. It is quite a pretty affair where you get to see colorful and fascinating ritualistic practices followed by the Kannadigas (Kannada people).

The Kannada wedding ceremonies are somewhat similar to other south Indian weddings, but mostly the wedding rituals continue for 1 to 2 days. Instead of lavish reception, Kannadigas prefer the wedding to be a vibrant ceremony celebrated in the presence of close relatives and friends.  There are pre-wedding, wedding and, post-wedding rituals associated with Kannada wedding ceremonies.

So, let’s find out what happens during a Kannada wedding ceremony. 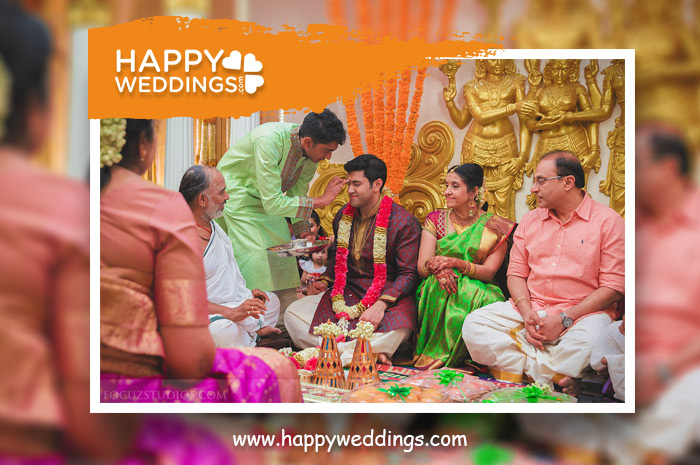 Like every other Indian wedding, Kannada weddings also perform Nischaya Tamulam, which is considered as the official engagement ceremony.

As part of this ritual, the parents of both the bride and the groom bless the couple after exchanging betel leaves and betel nuts.

The groom’s parents then gift their daughter-in-law saree and sweets and the bride’s parents gift the groom a dhoti and sweets. The wedding date is fixed during this occasion in the presence of the priest. 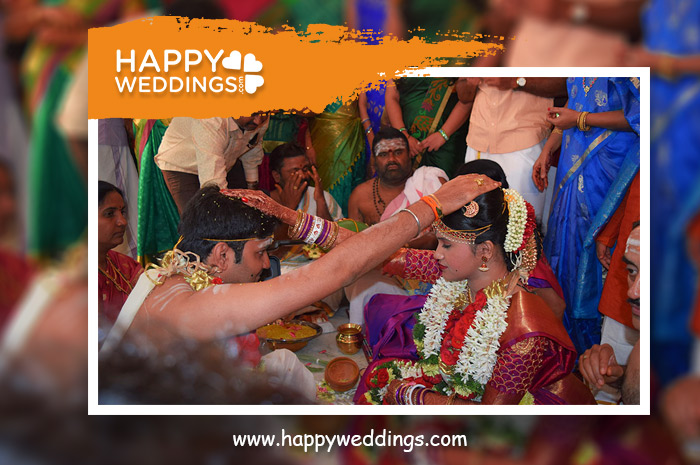 Naandi is an auspicious ceremony held to seek the blessings from the almighty to ensure the marriage happens without any trouble.

Also known to be a ‘Shastra’, this ritual is held at the residences of both the bride and the groom.

The ceremony is performed by a priest to make sure the couple gets a blessed life with prosperity, health, and happiness. 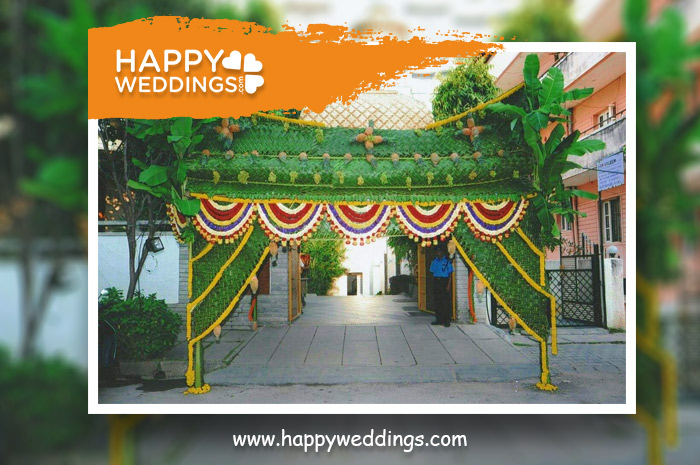 Chhapra is a structure formed with coconut leaves and banana stalks, which is tied outside the house where the marriage is going to happen.

Before getting tied, the Chhapra is subject to special puja. And this is known as Chhapra Puja. 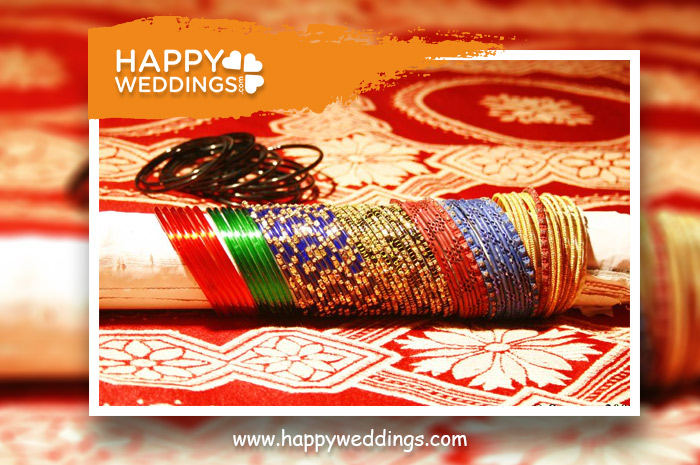 This is a pre-wedding ritual in which the bride gives bangles to the married women in her family.

This happens when the bride visits the temple to seek the blessings of the almighty. Bale in Kannada means “bangles”. This ritual marks the age-old tradition of Kannada’s wedding where the groom pretends to walk away after he reaches the wedding venue.

He will threaten his family that he is going for a pilgrimage to Kashi, a sacred destination because nobody in his family is interested in finding him a perfect bride.

After when he starts to walk away, his maternal uncle stops him and shows him the bride. Hearing this, the groom becomes happy and cancels his journey. This is one such fun-filled ritual in which the groom carries a walking stick and an umbrella along with some edibles like rice, coconut, and dry fruits. 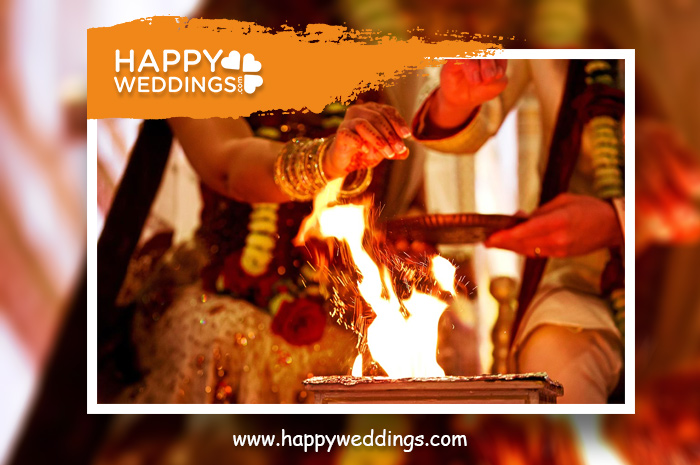 During this ceremony, the groom visits nearby temples to seek blessings from Lords. An idol of Lord Ganesha is placed in the venue and the things to be used for the marriage are placed in front of the idol. It is believed that Lord Ganesha blesses and sanctifies them.

There are various stages included in Kannada wedding rituals. It is an elaborate affair with lots of traditional activities in which the bride, groom, and the families partake. The wedding happens at a specially decorated platform, also known as a mandap. The chief priest who carries out all the wedding rituals will perform special puja of the mandap, just to make the place pure. And this is known as Mandap Puja. 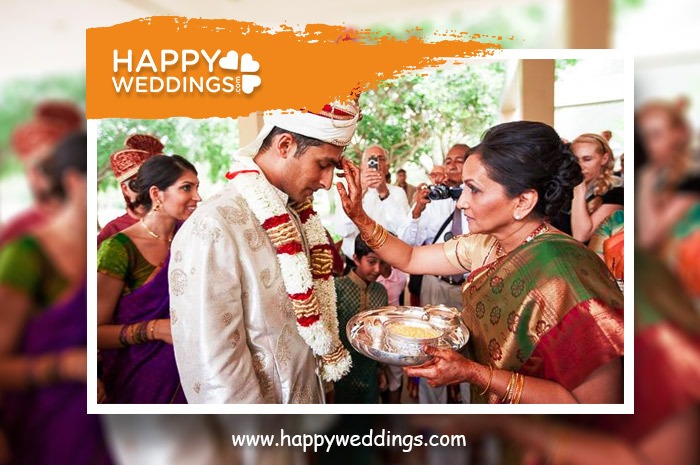 A group of five married women from the bride’s family greets the groom’s party. They together perform a prayer session as the groom enters the venue. During the Kannada wedding, the groom is considered as the incarnation of Lord Vishnu and hence the bride’s family starts worshipping the groom as part of this ritual. The bride’s father washes the feet of the groom and gifts him a dhoti and a silk scarf. The groom then attends the ceremony wearing these gifts. 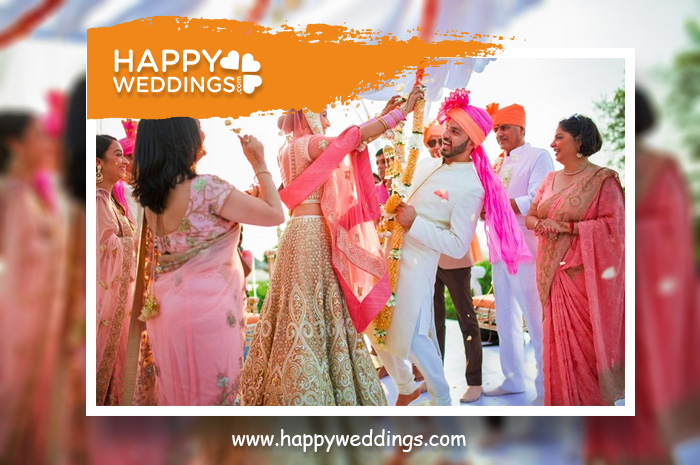 This happens during the entrance of the bride. Her face will be covered by peacock feathers, mostly held by her sister.

A cloth will be placed between the couple so that they will be prevented from looking at each other. The cloth curtain is gradually removed once the priest starts chanting mantras. Then the couple exchanges the garlands (Jaimalas). 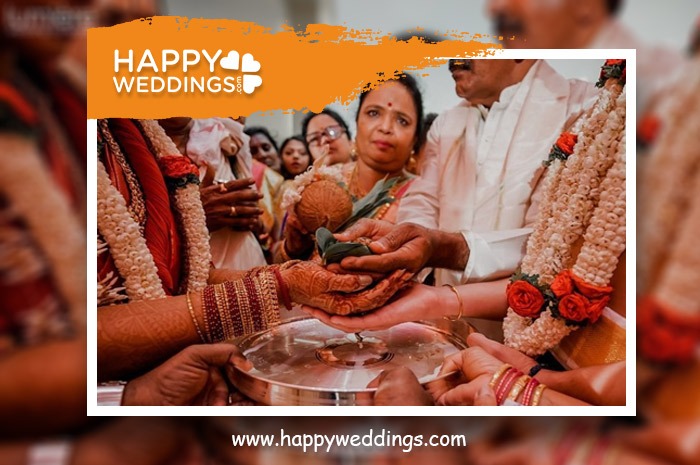 This ceremony is known to be “giving away of the bride” wherein the right hand of the bride is placed on the groom’s right hand. A coconut as well as a betel leaf is also placed on their hands. Once the couple joins the hands, the bride’s parents start pouring holy water on them. 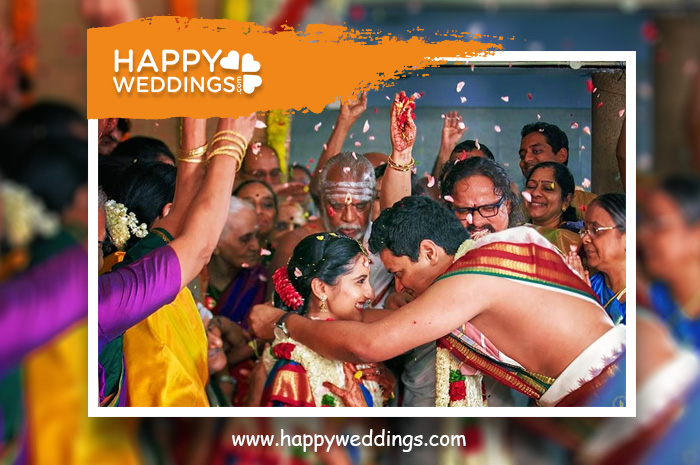 This is the major and the final wedding ritual during the Kannada wedding ceremonies. The groom ties the Thaali (the holy thread) around the neck of the bride with the help of five married women who surround the bride. After this ritual, the couple seeks blessing from the elders.

Post-wedding rituals are truly fun-filled ceremonies where both the families participate with traditional games, dance and music. Let us know about few of them. This ritual is actually a game in which the groom’s family hides a ring in a huge bowl of milk or colored water. The couple then starts searching for the ring, competing with each other.

There are three round set to find the ring. And if the bride successfully finds the ring, it is believed that she is capable of handling all the challenges after the marriage. This ritual really helps the couple to break the ice and loosen up the awkwardness. The bride officially bids adieu in this ritual. Her family happily sent her to the groom’s house with lots of gifts and other necessary items.

The bride’s brother is usually sent along with the party and mostly the brother stays at the groom’s place at the night and leaves home the next morning. Once the bride enters the groom’s house, she is given a warm welcome by her mother-in-law who performs aarti at the entrance. Locally, the ritual is known as Mane Kamsudu. As part of this ceremony, the groom presents his wife five beautiful sarees along with other gifts. The bride then wears these sarees for the rest of the post-wedding ceremonies held as part of Kannada weddings. Happyweddings.com gives you a golden opportunity to have a fun-filled Kannada wedding ceremony. Just find your Kannada bride/Kannada groom by registering with www.happyweddings.com/registration. It’s absolutely free. Then, why are you waiting for? Do it right now.

How to make a Perfect Marriage Biodata

Live-in Relationship: Here are the rights you need to know