Hindu Wedding: Everything You Need to Know 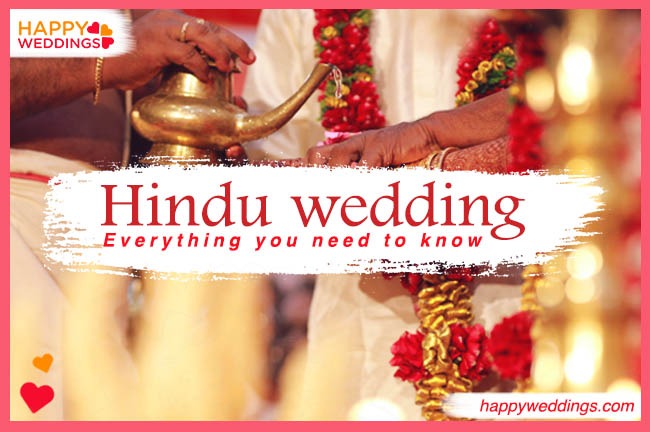 In India, Hindu Wedding is considered as celebrations for a lifetime. It is nothing but sheer merriment that you joyously relish with your loved ones. Two hearts unite, expressing their love and commitment towards each other where others bestow their blessings over the couple.

It’s nice to be in for a Hindu wedding where religion and culture play a crucial role making it the most celebrated and memorable day.

To know what is really going to happen keeps you curious. The invitees may be from different cultural backgrounds and they would be eager to know the rituals associated with the Hindu Wedding ceremonies.

Here is something about the Indian Hindu Wedding that you can’t miss in any way.

So, what is so special about Hindu Wedding?

As per Hindu beliefs, marriage is considered as the second important stage in an individual’s life.

Once a man and a woman get married to each other, the bond is for a lifetime.

Each and every Hindu Wedding is closely associated with myriad customs and rituals as Hindus give that much importance to the enduring cultural traditions, they practiced over the years.

When it comes to marriage, Hinduism denote it as one of the most important duties meant for a man.

He is obliged to marry a woman to pay the debt to his forefathers, by producing offspring thereby continuing the ancestry of his family.

Hindu Wedding; Is it a Long Process?

Well, it purely depends upon the state. Each state in India has its own traditional background and it is well reflected in Hindu marriages too.

Each and every customs and ritual associated with Hindu marriages highlight the profound significance of the philosophy and the spirituality that place hold.

What you see in Kerala as part of a marriage is not what you see in the neighboring states like Tamil Nadu, Karnataka, and Andhra Pradesh.

In Kerala, mostly Hindu weddings are short. There are a few exceptions when it comes to Tamil Brahmin wedding and other sects. However, rituals associated with the ceremony are somewhat the same. 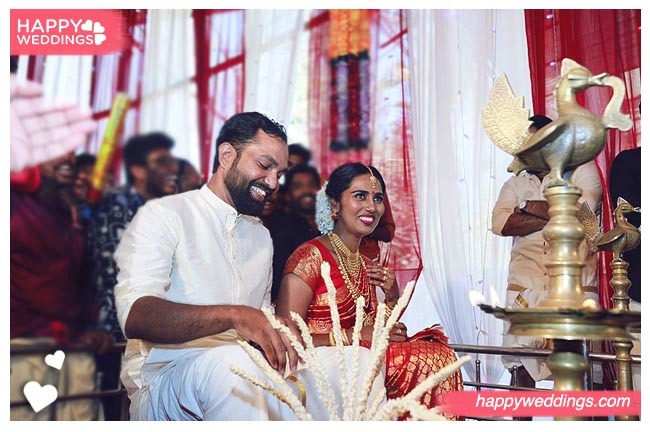 In Kerala, Hindu Wedding, famously known as “Kalyanam” is short and crisp.

There are various pre-wedding and post-wedding rituals associated with the wedding ceremony.

Mostly, weddings happen in the morning either at the temple or in a community hall.

The groom is welcomed by the bride’s father or brother. In the presence of the priest, the groom ties the “Thali” (the yellow thread) around bride’s neck which is traditionally known as “Thalikettu” (tying the knot). 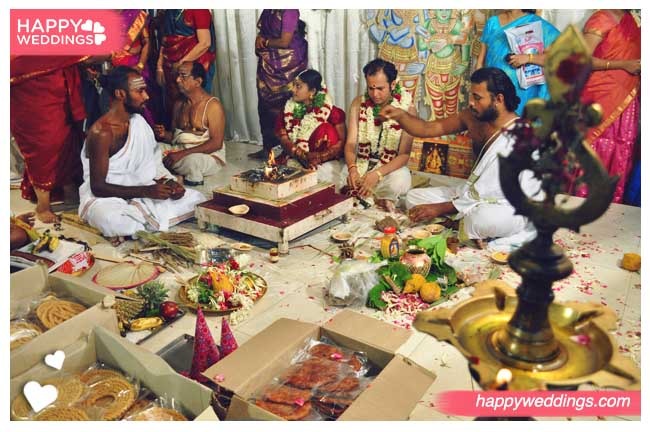 Like in Kerala, Hindu Weddings in Tamil Nadu also have some important pre-wedding and post-wedding rituals closely associated with the affluent culture that the state holds.

The marriages in Tamil Nadu signifies the age-old tradition rather than emphasizing on the contemporary gimmicks.

They highly rely on the spiritual allegory, filled with lots of fun and lighter moments that make the event a memorable one for the couple as well as relatives and friends. 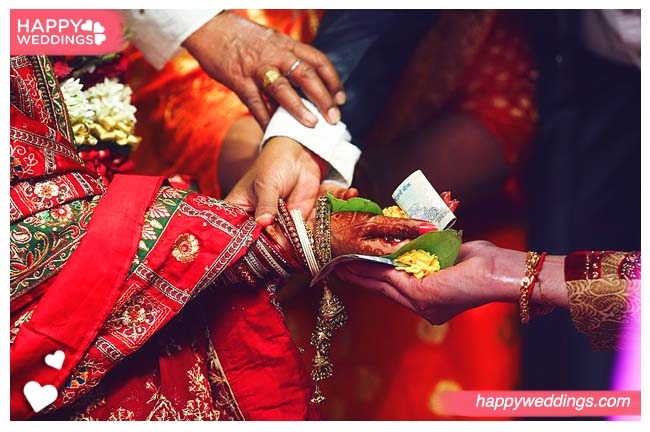 Known for its vibrant and enduring culture, Gujarati Weddings literally depict a bunch of ancient rituals tangled with pulsating celebration.

It’s a two to three day’s affair where there is hardly a dull moment. The pre-wedding and post-wedding rituals makes the guests experience a full-fledged wedding ceremony enriched with dance and music.

The utmost care that the hosts will surely win your hearts for you to fun and frolic to the fullest. Gujarati Hindu Weddings are truly a showy affair that you must experience at least once. 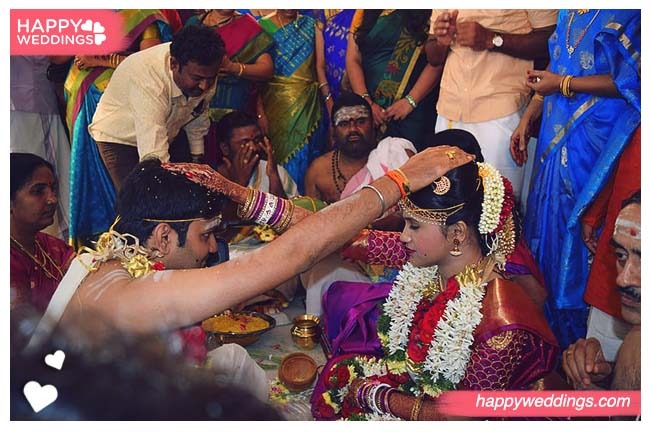 Focused entirely on the traditional rituals, Kannada Weddings are simple as people of Karnataka mostly prefer to follow their heritage as part of marriages.

What is most unique in Karnataka is that the wedding rituals vary from place to place among various communities of the state. However, the basics of the rituals are the same.

Kannada weddings show some similarities with the marriages in the states of Maharashtra and Andhra Pradesh. During Hindu Weddings in Karnataka, the bride is brought to the mandap by her sisters by covering her face with peacock feathers. 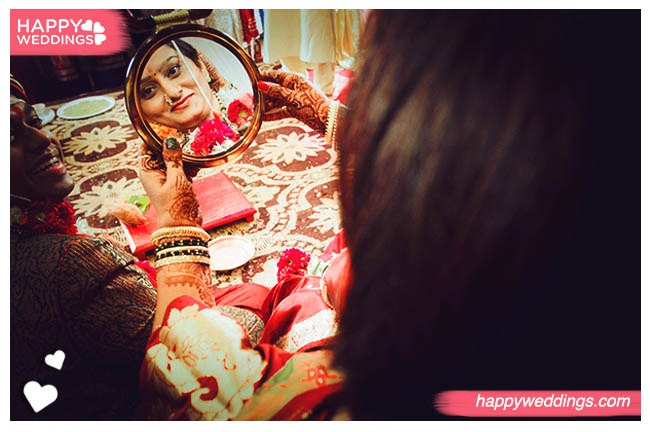 Weddings in Maharashtra are showy affairs with vibrant rituals closely and affluently associated with the cultural traditions of the state.

The Hindu wedding ceremonies are simple where the bride is beautifully dressed in Navari.

There are lots of fun-filled activities performed during the wedding ceremony.

One among them is that the couple is separated from a shawl partition which is removed after they seek permission from the elders to get married. 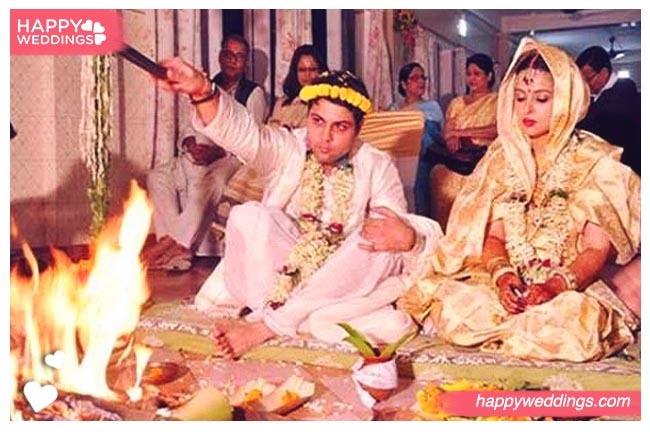 Weddings in Assam are celebrated by embracing the rich cultural traditions that the state follows.

Combining diverse pre and post-wedding rituals, the Assamese wedding starts with bathing custom in which the mothers of the bride and the groom fetch holy water from a nearby river.

Unlike in other parts of the country, here the reception is held before the wedding. One of the key elements to be noticed during Assamese weddings are the traditional attire that the bride and the groom wear. 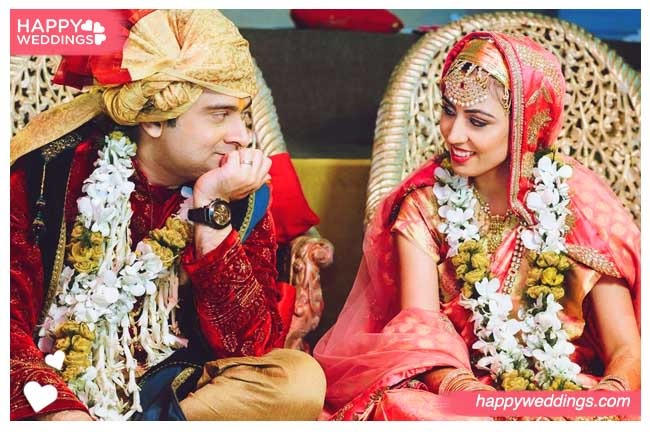 Known for its beautiful valleys, Kashmir is also identified for the wedding ceremonies which are truly the celebrations to behold.

Traditional Hindu Weddings in Kashmir are vibrant by all means. The bride and the groom will be dressed in traditional Kashmiri attire with oodles of sparkling gold jewels.

The food they serve is truly delicious with traditional Kashmiri dishes.

During the marriage friends and relatives of both the bride and the groom dances with Kashmiri songs, considered as an integral part of wedding celebrations. 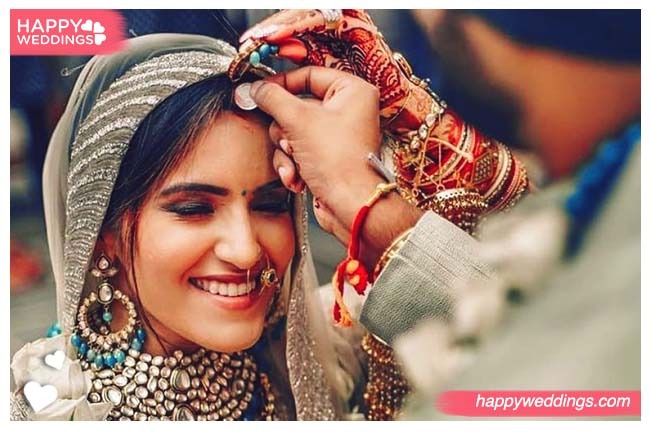 The people of Punjab are known for expressing their emotions, whatever it is. Such nature is exceedingly reflected in Punjabi Wedding that emphasizes the philosophy of life.

What you should know while attending a Hindu Wedding?

While attending a Hindu marriage, you will definitely have certain questions regarding what you should expect from it, especially for those who are not so familiar with Hindu Weddings. Let us have a look.

1) What you should wear?

It would be better to wear bright dresses as it signifies contentment. Wearing bold colors with glittering gold jewelry will add more charm. Gents can use traditional attire such as shirt, dhotis, Kurta, and Pyjama whereas ladies can be dressed in traditional Saree or Lehenga.

2) Who all are invited for the marriage?

Since Hindu weddings are celebrated big, everyone is invited to attend the function. Even though some marriages are celebrated in a bit smaller manner, most of the weddings are planned and celebrated against the so-called philosophies and hence you can expect a grand ceremony. All the family members along with friends and others are invited.

3) What kind of food would I be served?

It depends upon which state the bride and the groom come from. For instance, in Kerala, traditional feast (Sadhya) will be provided as part of weddings, which you should not miss in any case.

4) Should I bring any gift?

That completely depends up on you. Usually close relatives and friends present gifts to the couple and this can vary. Now-a-days people started ignoring gifts as they mention the same in the wedding letter itself. Instead they demand for the invitee’s blessings as their valuable gifts.

Hindu Wedding rituals and traditions vary from state to state. Each state has its own customs and this makes Hindu marriages timeless among others. Hope you got an idea about the vivid and continuing Hindu wedding traditions.

Why I am Still Single?